It is difficult to hold your son’s hand, after receiving a phone call and flying across country overnight, to look at his misshapen and lacerated face, eyes filmy, conversation disoriented, perseverative, a gurgling cannula sucking blood from his mouth, oxygen in his nose, multiple IVs.

On the other hand, it’s not difficult. It is exactly where you want to be, your every fiber seeking to draw out the pain, heal the tissue, do the right thing. Eighteen hours ago, he was laying on a Tucson street, bicycle broken like matchsticks, hypotensive, airway filling with blood, dying; the victim of a negligent driver. Eighteen hours before he was a joyous teenager, a top of-his-game espoir, bound for European races and national team slots, working ardently at winter training. Prompt EMS, suction and IV saved him, opened his airway and restored circulatory volume. Open reduction surgery with internal fixation by titanium plates and screws would rebind his jaw, fractured in a dozen places, eight teeth knocked out across the top of his mouth, right condyle snapped and dislocated, fractured left subcondyle.

This I balance five weeks post trauma. He’s had a remarkable recovery. His legs are strong, as are his lungs. His power is up, exceptional watts per kilogram. Six hours today on the bike, riding out from our house near Washington, DC. "Let him go, be the wind at his back" -- I tell myself. This I will do, but it is hard. When I was about Nathan’s age, a negligent driver ran a red light and hit me. At the time, January 1977, my own father wrote:


As I stood there in the hallway outside the Emergency Room, I saw Jim standing vibrant, healthy and loving in the family room and cursed myself for not putting my arms around him and persuading him to spend New Year’s Eve at home with us. He was close to doing so – if I had only held him at home. If, if – there were so many ifs to ponder as I waited for the double doors of the operating room to open … The doors finally parted ... [Jim's surgeon] talked briefly but directly. Jim was in grave danger. It would be several more hours before we knew whether the brain’s swelling would reach fatal proportions or stop … They wheeled Jim out. His head was a white turban of bandage. Tubes were in his arm and nose. We tried to touch him as the attendants wheeled him past us on the quiet rubber wheels of the stretcher. I probably called out what I had heard and said dozens of times on the battlefield but seldom believed: “Hang in there. You’ll be all right.”
With this, I work to balance the eerie burden of repeated history. I wasn’t as lucky as my son, my injuries deeper and harder to compensate. Where does a parent draw the line? My two boys began bike racing at ages 10 (Avery) and 13 (Nate). For us, it was the next stage beyond youth soccer, basketball, lacrosse and whatnot pediatric sport mayhem. A phase. But cycling became more, a unifying principle around which our family organized our lives, travels and passions. And the boys became good, very good. Racing around the country and internationally. Cycling is the main thing; both boys wish to become professionals, have guided their college selections towards physiology and sports. Who would have thought? This from a family of scientists, software geeks, lawyers, writers and school teachers?

Cycling is the path that is before my sons, their passion and desire. It is a beautiful thing, their choice. Their hard work and success will bring not just individual victories, but will also lift others seeking joyous and healthy lifestyles. While I urge caution, the Tucson experience is a stronger caution than any can imagine.

Will I feel bad at the next accident? Of course. And we will be there, with every fiber and talent we possess, as we care for those we love, gently enabling their passion, the next podium, the beautiful slice through the sun and air. 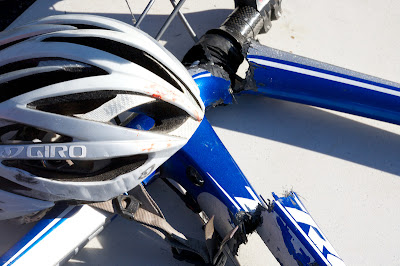 On December 14, [2010] I posted a Christmas Letter, with thoughts from the year. Six days later, much changed. My son was hit by a pick-up truck while riding in Tucson, Arizona. It was code red trauma, life threatening. Thankfully, he has come through strongly. He fractured his jaw in about 12 places, some dislocation, communition and crushing, lost eight teeth, had reconstructive surgery, and is moving forward.

Our family has done a good job rendering care, love and support. We assembled an A-team of medical and legal experts. Nate will race again, for Team USA in Europe in a few months, and Cal Giant across the season. He is an incredibly tough, smart and fast rider. By many graces, things are going well.