Week in Bend (and other places)

June 19-29, 2010 -- "Vacation" seems to mean other things. I'm working on a photography book with Kevin Dillard, tentative title Urban Cycling 2010, which will portray not just the grit and massive hard work of competitive athletes riding bikes, but also the surrounding urban culture. A couple weeks ago I traveled to Philadelphia to photograph the Philadelphia International Championship, a pro race. That turned out pretty well (preliminary selections here). Subsequently, Kevin and I covered a pro-am race in Arlington, Virginia. On Saturday, June 19, I drove to New York City to cover the Harlem Skyscraper Classic, an astonishing event and locale. As in Philadelphia, the day before, I walked the course area and captured some of the scene. I was taken by a drum circle in Marcus Garvey Park, children cavorting and extraordinary body builders. 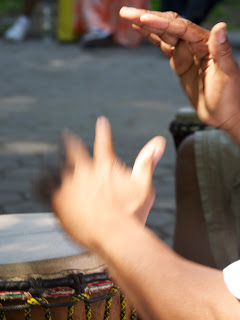 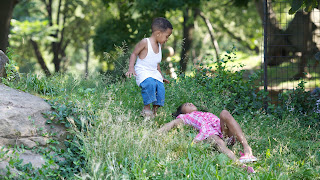 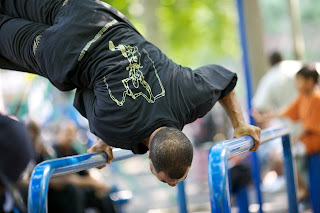 After the prelim work Saturday, I wrestled with about two hours' traffic across George Washington Bridge and to South Orange, New Jersey, where my cousin Stony recently opened a restaurant -- "Stony's" -- across from the train station. About ten family members and friends forgathered and had a great dinner on Stony's beach-themed patio, rollicking to live music, downing cold beer, tuna, little neck clams and such -- all great. I overnighted with cousins in their old farmhouse in South Plainfield. 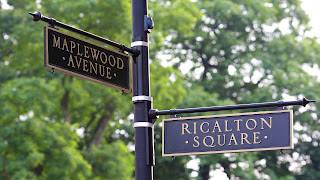 Sunday, I woke early and drove to Maplewood, home of James Ricalton, my great grandfather who was a distinguished photographer, schoolmaster and world traveler. (Ricalton walked from Capetown to Cairo three times, was Thomas Edison's first cinematographer and world-traveling research assistant on the light bulb project ....) I breakfasted there with the head of an NGO that is doing important work in maternal and child healthcare. We may work together on a project in Africa. I then made my way from Maplewood to Harlem for a day of picture-taking -- great stuff. Sunday evening I traveled home, but found the New Jersey Turnpike frustratingly clogged, so I overnighted in Princeton, and drove the rest of the way Monday morning. We caught a 5 PM flight from Dulles to Portland, Oregon, and drove to Bend, arriving about midnight (3 AM eastern time).

About 20 folks (riders, coaches, parents and alum) from the National Capital Velo Club U19 squad I direct are in Bend. We had a great time, supporting some very strong riders, dining and partying about the vacation town. On Wednesday, Carolyn and I rode most of the way up Mount Bachelor from our house, an 18-mile climb. Carolyn has become very strong and I'm a bit thickened (she was riding better than me on Bachelor) ... so I'm energized to work a bit harder over the rest of the summer to regain my form and endurance.

Our fourteen year-old star Shane Scoggin crashed out in the tight, one kilometer criterium Wednesday. Pulling away from the lead chase group on the last lap, he overcooked a corner and went down, a chaser ran over him; he was pretty banged-up and blotched with road rash, nothing too lasting (except the desire to win next year!). Thursday, we did time trials. We had some good results and an even better dinner party on our house deck. Friday, our older cohort rode criteriums in downtown Bend, and Saturday/Sunday long road races for the national championship. My 16 year-old son Avery raced 40 miles and my 19-year-old son Nathan raced 96 miles on the rolling Awbrey Butte course. We fed and cheered our boys and teammates each lap. Nathan and his teammate Kevin Gottlieb both got away at times during the long race, earning plaudits and a write-up in VeloNews.

Working with beginning to top elite athletes is remarkable. These kids press so hard, undauntingly over many years to reach -- or to reach for -- the top. Thousands of miles training, grueling races like New Mexico's Tour of the Gila, Oregon's Cascade Classic or Massachusetts' Fitchburg/Longsjo Memorial. The kids focus on cycling and abstain from many adolescent engagements not conducive to top performance. Often the greatest reward is just a brief run off the front of the pack followed by a bunch finish, day after day, faces caked with salt, cheeks drawn thin. Then breakthroughs happen, and racers climb the ladder to yet greater competition. It's a virtuous cycle. We're getting there. Sunday and Monday we'll do some exploring and relaxed bike riding in the mountains. We return to Portland for an early morning flight home Tuesday.

Bend is very beautiful. In late June, the mountains remain covered with snow above about 6,500 feet. There are many crystal lakes in the hills, and the beautiful Deschutes River tumbling down from Bachelor and through town. Lovely parks and many tens of restaurants -- taco shacks to haute cuisine. The sounds and stresses of a major bike race -- time trial countdown clocks, slapping chains and cogs, tympanic wheels, chaotic feed zones, cheering crowds -- mesh well. 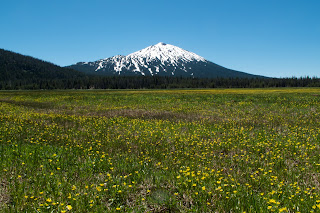 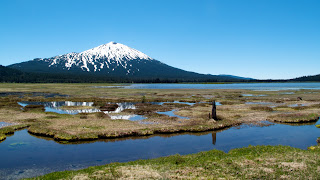 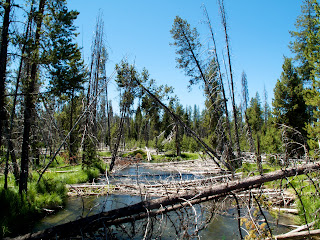 I haven't blogged for a while, except the Dillard/Wilson book preso. I did a lot of connecting when I was in Africa, writing about the poor women and children, AIDS patients, suffering -- a reach across a large ocean, to stay in touch, proportion emotions, and float some pics (Aduare slideshow). That went pretty well; we're helping a few hundred indigent children each month. Now, I'm looking to do a non-profit survey in Haiti this fall, maybe Darfur in spring.

I used to write compulsively about photo technique, learning and stuff (e.g., '1/1250 @ F8 x ISO 400' ...). Now I am in Philadelphia, to cover the International Cycling Championship, gather material (I hope) for our book. Let me start by saying a number of things: Philadelphia is an awesome city, great architecture and public art. DC, where I was born, is nice, but my informal measure puts Philly over the top. My good friend, JudyB, a child of Philadelphia, should know, she wins! What a beautiful city. My ancestor, James Wilson, sits perpetually on a podium at UPenn, and I collect shallow heriditary remittances. But look at this art and architecture (front of museum, 'Rocky's steps' ...), awesome! 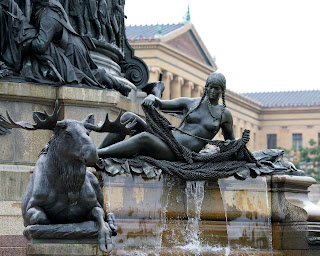 I'm shooting tomorrow's bike race with a high end portrait lens, a 135 mm F2L atop my full-frame Canon 5D. Not a sport lens, my zoom. Why? Well, to me it's about the people, yes the cyclists are awesome, churning massive watts up Manayunk Wall (a horrendous pitch), but it's getting the people that marks me as worthwhile. Look at this fellow, sitting in Love Park. Says a lot to me about the world and society. 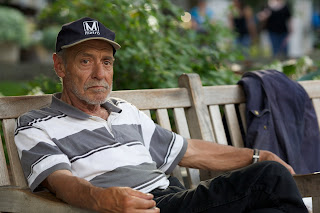 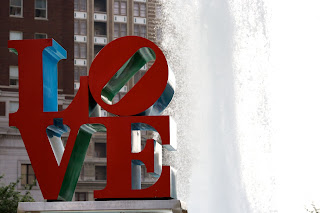 Alas, we will see. Oh another thing to say, I'm so proud of my cycling family. All raced today at Church Creek time trial (near Cambridge, MD). Ave pulled down a silver for Juniors, and Care (W4) and Nathan (Cat 1) hit personal marks for their distances. I ride recreationally, but am off the back compared to these horses (challenges!). Anyway, Venga to team W! We're off to Bend in a couple weeks for national road championships and healthful riding for the rec-level rents.