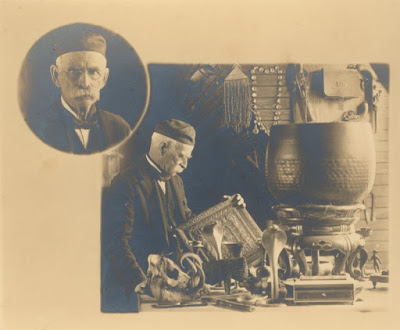 Roger Bailey, a retired art professor from Saint Lawrence University in Canton, New York, reached out to me a year or so ago because he is interested in my great grandfather and namesake James Ricalton. James was a great but largely unheralded photographer and explorer. James’ photographs are in many collections, including the Library of Congress, Smithsonian, and Metropolitan Museum of Art. He did much work for Thomas Edison.

Roger saw this and wanted to explore who Ricalton was. I have a pretty good trove of Ricalton writings and artifacts, from the chest he packed to carry material down the Saint Lawrence, to his diary from his 1909 walk from Cape Town to Cairo, to various photographs, Edison notes, and Kikuyu carvings. I also know Ricalton and his stories through his daughter, Mary, a beloved friend, my paternal grandmother.

We hit off easily. I picked Roger up at the GWU Metro Thursday evening and we came to my Georgetown townhouse, and poked through various papers, boxes and troves, discovering stuff of which even I was unaware. Then we went to a local pub, Sovereign, for dinner and beer. On Friday, Roger spent the day at my house reviewing material, with a trip to the Library of Congress to meet with a curator. The curator, Josie, was wonderful. She showed us various references and, most fantastic, moving pictures Ricalton had made — in Cairo, Egypt, and most likely Canton and Shanghai, China, c. 1897. (Specific provenance of these old but now digitized films requires further research.) My father George had always said we should go to the Library to see Ricalton’s films, but we never did. (Dad, a writer, was much more a man of “should do” than “do.”) So this visit with Roger felt a bit warming for me, akin to a lost father-son activity.

On Monday, we visited with the senior photography curator at the American History Museum, focusing our insights and interests. In a couple weeks I will meet with a noted antique and old-book expert to gain more knowledge, and perhaps learn other references. Roger and I surfaced a few new Ricalton materials. I am continuing my research into Ricalton’s Africa journeys, in particular, his responses to adversity that ranged from technical inconvenience to medical trauma and death of a young tribesman, to the loss of Ricalton's son Lomond by typhoid pneumonia in British East Africa.

I remain in search of Ricalton photographs or writings from Abyssinia, what we know today as Ethiopia (where I do charity work).

Email ThisBlogThis!Share to TwitterShare to FacebookShare to Pinterest
Labels: ricalton

Steven Spielberg and Amy Pascal’s movie The Post is a compelling depiction of the decisions made by Katherine Graham (played by Meryl Streep) to publish the Pentagon Papers in opposition to the Nixon administration, against the advice of her lawyers and investors, and in support of her news staff led by Ben Bradlee (played by Tom Hanks). Two themes stand out: Freedom of the press against an ill-motivated government and the courage and insight of a very impressive woman, Mrs. Graham.

Like many documentaries, the movie was selective to fit a complex event into a two-hour film – to paraphrase Mrs. Graham’s husband, Philip, it was a rough draft of history. What was missing included the decisive Bazelon appeals court scene between Pentagon officials with a “top secret” supposedly contained in the Pentagon Papers, which the Administration forcefully argued supported non-publication, and the Washington Post lawyers and experts, highlighted by George C. Wilson’s decisive testimony. This deeper investigation of prior restraint and rule-by-facts is covered by Geoffrey Cowan’s 2008 play Top Secret: The Battle for the Pentagon Papers and described by CBS's interview with George.

I had an insight from George, my father, that fit nicely with Spielberg’s movie, which I submitted to Pascal’s creative executive early in 2017. It fit nicely with movie scenes portraying the tension between Mrs. Graham and Secretary of Defense Robert McNamara – though it may have been over-elaboration, given the already effective screenplay.

Here’s part of the bit I offered: “Every time Robert McNamara saw Katherine Graham, Secretary McNamara would jab his finger at her (I imagine at a high society Georgetown cocktail party) and say: ‘George Wilson is the worst reporter in this town.’ Mrs. Graham would turn, smile and say, ‘I know.’ (We like it that way, she'd convey.)”

Dad had a strong track record taking on the military and Pentagon on many counts, wrote sharply and critically about the Vietnam War, sometimes covering the front page of the Post with three stories of breaking news.

An amazing thing about Mrs. Graham, Dad later reflected, was that she never told Dad or others about Secretary McNamara's criticisms. She kept the newsroom from this undue or tilting influence. Mrs. Graham was extraordinarily decent.

In any case, please see The Post, an enlightening and hopeful film. You can purchase a copy of Top Secret: The Battle for the Pentagon Papers play on Amazon or learn more from this USC Annenberg web site.