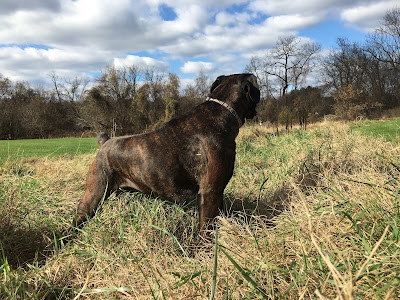 11.14.2015 -- Why do I cry? I am very fortunate. I was walking my boxer Soot in the woods and fields at Langley Forks, adjacent to the CIA. A soccer game had mustered in the lower field. Soot ran and leapt with joy, cavorted as we walked about the upper field and through the woods. The day was beautiful, crisp air, blue skies, puffy white clouds. We walked about the soccer game at the lower field. The grass was damp but crisp. The players were good, very good; a mix of men and women in their twenties and thirties, I surmised. Cheers and lacing teamwork, as they cut and pushed the ball back and forth, quick stepping in corners or about an opponent. About two-dozen spectators sat on benches and folding chairs at the side of the field. Young children ran about, dodging in and out of spectators, between blankets and coolers. Meadow, woods, and a bit of marsh surround the field. Soot was in heaven, nuzzling the crisp, dried grasses, golden-hued, rolling and gyrating on her back. I was crying.

This was the field some 40 years past where I had run joyously, running laps for fitness and playing rugby with many beloved friends. Age and injury had taken away my athleticism. But I cried because of the gap, the missing joy of this experience, for my boys. In the restricted and constrained lives that they were given, I felt they missed some of the careless joys I had. And I missed holding them; I missed their happiness and love, which was somehow abrogated in a broken relation. I walked further with Soot and sat in the tall grass at a meadow, out of sight. Soot rolled joyously. I began to sob.

The night before I was at Blues Alley with Adriene, an artist and creative, a journalist, friend of Barack and Michelle, and many. We were listening to Jonathan Butler, a South African, who sang and played deeply, soulfully. His work includes a tribute to Nelson Mandela, which I had listened to earlier this week, and cried. My seat and table had me twisting to watch Jonathan, about eight feet away on stage. Various lights shined. Tears flowed on my face. It was the beauty of Jonathan’s music, the close scene, Adriene, and my release from Ethiopia.

When one walks about the impoverished, the destitute, and as much or more, the givers who make things better, much comes to the soul. I was heavy with emotion. Joy, yes, because we made things better. But trouble and sadness because things are so bad. “Shee-shee-shee,” replayed for me. I wanted to go back, to help more, and give comfort.

I was also afraid. Adriene did not know until I told her. Nor did the band. (I told the keyboardist, Arlington Jones, after the show.) More than 100 people had just been killed in Paris, victims of coordinated terrorist attacks. Many were youth attending a concert, inside the Bataclan, slaughtered by submachine gun. Others were dining in a couple popular Right Bank restaurants. Others were incised, avulsed and compressed by suicide bombs. Paris was littered in blood.

The event was live, as we listened to soulful music in a nightclub in Georgetown. I checked the exits, my path there through people, tables and chairs. How I would pull Adriene down and cover her if something happened. The blood, death, trauma, and injury in Paris were alarming, but I don’t think I cried because of it. I cried because of the beauty of the human response. Those who care, those who ran in to aid (and some thus killed), those who opened their homes to the injured and displaced. (“#Porteouverte” was the social media hash tag -- Our door is open if you need.) I cried because of the innate beauty of the human response, like those who gave me care, those in Catalog. 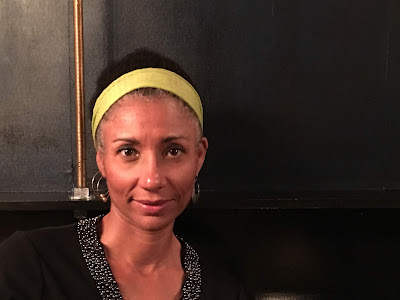 Those We Serve -- Liver Cancer

10.27.2015 – I had dinner with Dr. Alemayehu at Rodeo, a cowboy-themed open-air restaurant in Bole, Addis Ababa. It was lovely; wood fires burned ambitiously in large pits about the patio. I had steak and beer; Alemayehu, chicken and rice and mineral water. We coursed over many topics, from the deeply personal to operational matters for our charitable healthcare program, EHN. We spoke of the larger framework of governmental health programs, charity and NGO management, including work by the Gates Foundation. I said I understood that the government’s model is to provide a healthcare worker (a nurse) or two for every 100 households, and one clinic for every 1,000. I thought this was good, and hoped that it would put my small non-profit out of business.

Alemayehu lamented the quality of care at the large health centers, and said there are still large gaps that EHN and NGOs fill. In fact, today, he said, he saw a man [1] who had terrible stomach pain. He had been to multiple doctors and health centers. He paid 1,700 ET Birr (about $90 USD) for an invasive endoscopy. They had given him medicines and many tests. Nothing improved. Alemayehu touched the man, palpated his abdomen. He felt a mass on his liver. He conducted ultrasound. There was a large mass, a tumor. LeAlem’s lab analyzed the patient’s liver enzymes and function. The numbers were very high. The man had liver cancer, and was going to die. Alemayehu respectfully and kindly gave the accurate diagnosis and prognosis. The man was comforted, thankful, after months of stress and wrong diagnosis and treatment.

We discussed the patterns where the large health centers perform the function, but do not treat the patient, and as a result they miss things. I’ve seen this in the United States, for example, where my father was on needless chemotherapy (Neupogen) for months, and my mother’s amyotrophic lateral sclerosis (ALS, Lou Gehrig’s disease) went undiagnosed by esteemed practitioners. (Even the suggestion of ALS, by my father, was laughed at by our family physician, my wife’s doctor.) So nothing is perfect. But my base sense is the medical care provided by a patient-focused doctor, who seeks to understand the full context, is better. More, I think a community-based physician in a developing country like Ethiopia may be more skilled because he or she has to cope with a broader array of affliction, with less technical intervention and support. In the main, a third-world community doctor, like Alemayehu, is very closely connected to those he treats.


[1] The subject is a private patient, not an EHN beneficiary.
Posted by Jim Wilson at 4:00 PM No comments:

Those We Serve -- Kittens

10.27.2015 – A few doors down our next beneficiary lived in a similar one-room hovel, a bed, a couple of boxes as chairs, and a box of kittens and mom-cat. She paid about 35 cents US (7.5 Birr) per month in subsidized rent. For the prior four years she had lived on the street under a plastic tarp. She was about 50 years old, clothed in bright colors and beautiful. I insisted she sit next to me, atop her bed, legs trailing down towards the room center. She had suffered so much, but was thankful for the medical care we gave. With the health care, she was now able to get out of bed and go to work, where she could make money to help support her daughter (who had lived under the plastic tarp with her). Her deferential sensitivity struck me. I wrapped my arm around her back. Her husband, her daughter’s father, had died several years ago, of AIDS. She and her daughter are HIV positive. I gave 200 Birr, about 2-year’s rent. Better, I hope, a good meal.
Posted by Jim Wilson at 3:59 PM No comments:

Those We Serve -- Maggot Head

While Kneeling describes recognition and a compassionate response, other recognitions did not yield such kindness. There are many poor, begging on the streets of Addis. Some with grave deformity, young children pressing out before their mothers, old thin women pointing a finger into their mouths, ‘give me food.’ My one-kilometer daily walk from the Jupiter hotel to LeAlem Higher Clinic passed perhaps a dozen sad cases. I did not take pictures. In the first block, a higher sidewalk in front of construction sites, I’d walk past men sleeping on the cement, splayed like fish on a dock. One fellow’s head, face, and neck were crawled over by hundreds of white maggots. This was shocking. I knelt; I thought, should I bring him to the hotel room and have him bathe? Part of me considered buying a bottle of disinfectant alcohol and swabbing and cleaning his head, then bringing him to the clinic for de-lousing and medication. I did nothing but let him sleep. There are limits and one develops filters in such situations. When I was trained as an emergency medical technician (EMT), we learned ‘scene safety’ as a first, most important rule. You have to protect yourself. An ill or dead caregiver is a greater loss than one person’s suffering, than to go forward with an unsafe incident. With maggot head, I considered my own susceptibility (and that of the next person to sleep in my hotel room). Also, I thought about the general structure of the problem. A man without employment, sleeping on the street, covered with maggots. There are many contributing problems that need repair to make a durable solution. My conscience was also eased by the fact that I give so much already, to mothers and children in need, in Addis. Alas, though, it is an important question and urge. We wish we could fix many more things. There is no shortage of need, of the compelling and grotesque that may be improved. But we are mortal, and cannot cure all.
Posted by Jim Wilson at 3:51 PM No comments:

Those We Serve -- Kneeling

10.27.2015 – We were at Meseret Humanitarian Organization, a women-focused NGO in Addis Ababa, sub-city Kirkos, to see their tour of capabilities and accomplishment. After, we visited several beneficiaries. The first was a mud-walled, tin-roof home about 12 feet square, with a rear niche that was for cooking. A man, about 46 years old, sat rocking on an upturned bucket for his chair. He was crying gently, “Shee-shee-shee,” as he rocked back and forth. With the oncoming of three social workers and me, his niece, a beneficiary, turned and relocated him to another chair (an upturned box with a towel atop), more in the corner, out of the way. He complied. We learned he was mentally retarded, deaf, and blind in one eye. Assembled in the dark house, we talked our normal business with the beneficiary: How have you worked with Meseret, what has been your experience with healthcare provided by LeAlem? Do you have children? How are they? Are there areas we can improve? The woman answered steadfastly and appreciatively. She had had right leg pain and diffuse stomach pain, epigastric pain. She had been treated well at LeAlem, with respect and good results. (This wasn’t her prior experience at other centers, she said.) Her children had scalp fungus, which was treated with antifungal cream and antibiotics provided by EHN/LeAlem, and cured. We spoke for about 15 minutes. These things passed through. I took a couple pictures. Four healthcare workers. We’d ignored the man. I asked, “Can I touch him?” I kneeled on the mud floor, and reached my right hand to the man’s back, and stroked. I reached and held his left hand, and squeezed gently. I drew a bit closer, and held for a few minutes. His crying and rocking stopped. The man’s older sister, also disabled, had hidden herself behind a dingy curtain in the kitchen. She started to cry.

We stepped out of the house to the alley. I lingered. The sister came out and hugged me. “Thank-you-thank-you-God-Bless,” she said. I touched her face and said, “Thank you.”

Posted by Jim Wilson at 3:47 PM No comments: