Saturday, May 12, 2018, was magical. I rose early and drove from DC north into Maryland, having volunteered to serve as the medic for the National Capital Velo Club’s (NCVC) Poolesville Road Race. When I arrived about 7:15, there was a purposeful bustle of the race getting organized — police officers, race officials, club members setting-up registration, a bicycle repair tent, port-a-potties, food truck — all told, a crew of about 50 preparing to stage six races ranging from 32 to 74 miles for several hundred men, women and junior cyclists.

Poolesville is a unique and, for some, most favored race. It traverses country roads for a ten-mile loop in upper Montgomery County across farmland, woods and aside the Potomac River and C&O canal. One section along River Road is hard-pack dirt and gravel. It elevates riders’ thoughts to the cobblestones of Paris-Roubaix, one of the greatest and most grueling races of the European classics. It is also where, as riders quickly descend the paved Edwards Ferry Road and turn right onto the dirt, we see a lot of crashes.

There was an immense warmth as I stood amidst the race-prep action. I held back tears of joy and nostalgia.

From 2004 to 2011 almost every weekend morning from March to September I was at bike races with my boys, Nathan and Avery. I served in a number of capacities. Initially, as a flummoxed parent trying to do things right — from pinning the race number on my child’s jersey in the right spot, cheering riders, filling and handing out water bottles in feed zones, to taking photographs as a race photographer, to being trained and working as a race official, to performing medical duties (I was trained as an emergency medical technician).

It was a full and joyous life. In about 2006, I was named Team Director for the age 18-and-under NCVC squad. We became quite good, winning a national title for the best developmental team, and preparing talented riders who later rose to compete as professionals across the United States and around the world.

When my children went on to college and beyond, I stopped my intense involvement in the bike racing scene. At Poolesville this day, dressed in my medic garb (purple EMT gloves, gauze sponges, and bottles of saline solution poking out my pockets and backpack), dear old friends came and hugged me. Myron, the lion and long-time president of NCVC, Mimi and Jim, distinguished national race officials, Claudia, Tom, Marc, Bill, Ryan and dozens, racers and friends. Almost all had been captured in my photographs over the years and worked side-by-side with me as a volunteer. Some I had tended to after race crashes. I was “Doc Willy,” my moniker from elementary school, where I cared for buddies who got busted up in the DC schoolyard. This was a nest and community where I raised and supported my boys.

Serving as medic is like sailing — hours of boredom mixed with moments of “terror and chaos.” I rode in a car that followed the race packs around the course, traveling about 120 miles across the day, at an average speed of 15 miles per hour. I watched as a woman racer, "Marilyn," tried to move up in the peloton of about 30 racers and, by mistake, edged right off the road. She tumbled and flipped over the top of her bike. Her left-side skin, jersey and shorts were shredded, shoulder, arm, and hip. Marilyn’s alertness and level of consciousness was normal. She was in pain. I assessed her as stable and gave her gauze sponges for immediate self-care and returned to the medic car (my duty was to attend to trauma, to save lives, and stay with the race pack). Marilyn returned to the race start area. I later cleaned and treated her with saline, povidone-iodine, and occlusive bandages. I gave her supplies so she could also wash and treat her injury in private areas in a private room.

While following the later “Pro 1/2/3” race our radio crackled and my cell-phone rang. A rider was down and needed assistance at Corner 5, the start of the dirt section. We pulled in and parked out of the way. A young man, "Thomas" was standing unevenly near his dusted-up bike; other volunteers and officials stood about. I looked at Thomas and sat him in a chair. He was alert and oriented by four standard measures (AO4). Thomas had come fast into the gravel section and, it seemed, flew over his crashing bike in superman position, landing predominantly on his front right-side. He had abrasions and lacerations from head to toe. My assessment indicated that an ambulance was not needed. (None was called.) Most serious, Thomas had an avulsion of skin and tissue on his chin and jaw that exposed a spot of underlying white tissue, which I surmised was bone. Thomas initially reported little or no pain, “just a numb feeling.” Later, he said, as the adrenaline wore off, the injuries hurt. I performed an initial saline wash and povidone-iodine clean of Thomas's wounds over about 20 minutes, checked his symmetry, palpated his thorax, re-checked alertness, and had Thomas transported back to the race start.

After the race concluded, I returned to the start area and further cleaned Thomas's wounds, applied 4 or 5 occlusive bandages to the larger wounds (excluding his chin, which was not amenable to bandaging, given Thomas's beard), and applied Neosporin ointment to Thomas's unbandaged abrasions. I had him self-clean and treat his chin, given the tenderness of the injury and confusion of flaps of skin and exposed tissue. He salved his chin generously with ointment. I gave Thomas additional gauze sponges, occlusives, saline, and Neosporin, and advised a soon visit to a hospital emergency room or his doctor. His chin would require stitches, and likely debridement and cosmetic surgery.

We joked that while he did not win a race trophy today, Thomas would have a trophy on his chin for a long time.

Thomas was very grateful for this care. I learned he is a third-year medical student at Temple University in Philadelphia. I noted that I was honored, a basic EMT treating a doctor, a balancing of skills and need.

I got home a bit late, 5 PM, and washed and shaved myself thoroughly. (Though I wear medical gloves and protective gear, I always feel a bit tainted by blood, body fluids and medicines after duty.) I put on my good suit, white shirt and blue tie, spritzed with after-shave, and headed to a charity event with high society in McLean, with my love. 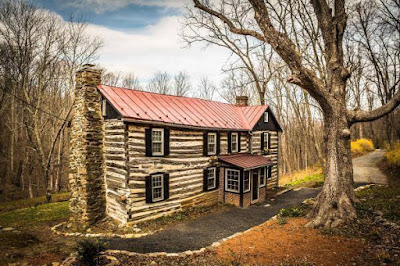 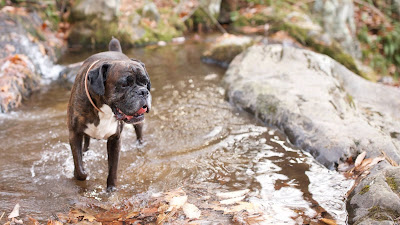 Lots to do – read, walk, enjoy a cup or glass, gaze at the pond or a fire, visit with friends, build something, ride thy bike, paint, write the Great American Novel ... Nearby highlights –


We’re out most weekends – Call or text to confirm

Bike pump, water, tools around back ... 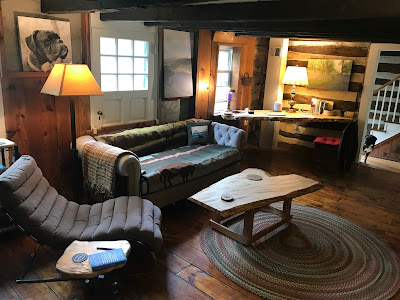 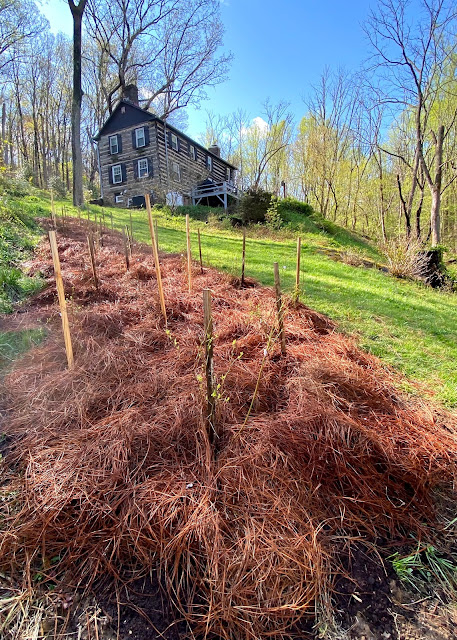 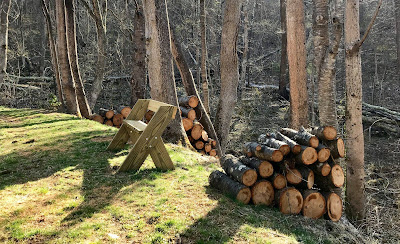 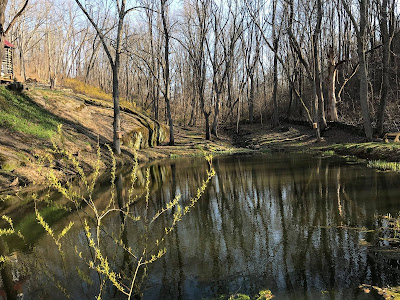 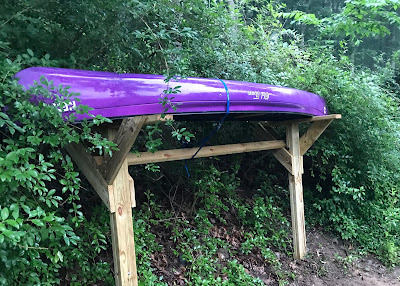 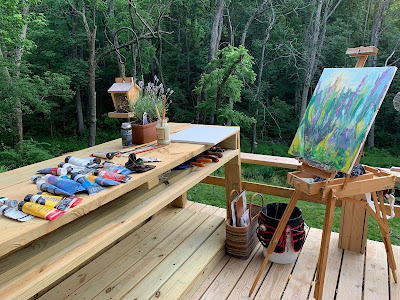 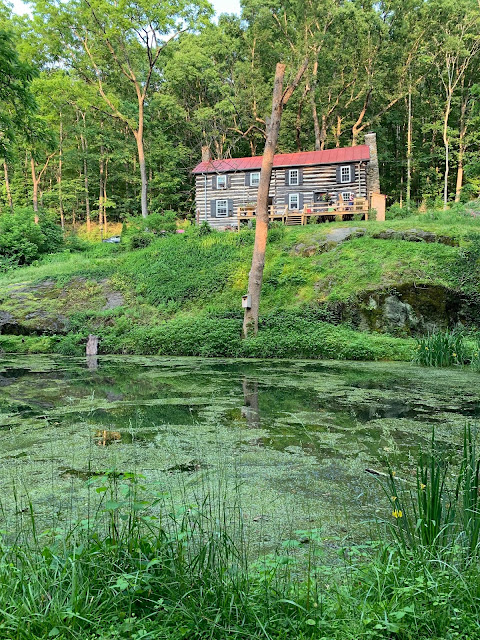 Posted by Jim Wilson at 9:46 PM No comments: