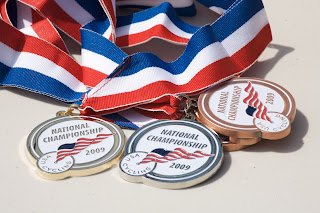 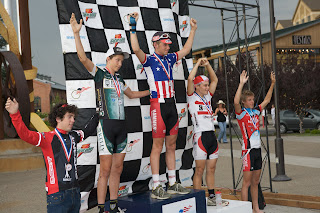 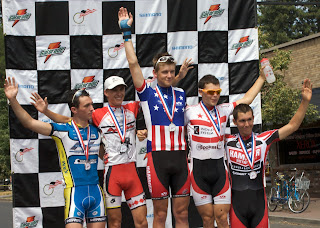 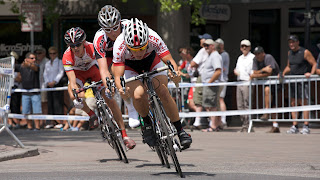 Saturday, August 1, 2009 -- 15-16 y.o. Criterium
News Flash -- Awesome Avery, my 15 year-old son, grabs 2nd in the U19 criterium in Warrenton, Virginia ... a part of the 540 race series. This against a stacked field. Bodes well for today and tomorrow's crits in Bend ...
Today at 3:00 PM, Steve Kendall, NCVC's 16 year-old powerhouse, races in the 15-16 year old criterium in southwest Bend (across from the Old Mill area). I'm headed off for a 90-mile loop around Mount Bachelor as my last ride in Bend. Watch Steve's crit, then pack the bike and take it to FedEx. Nate and Steve Black have big downtown crits a 10:30 AM Sunday. This should be a good race for both men. After the Sunday crit, we drive to Portland, overnight and fly home Monday.
Steve Kendall does awesome powerhouse move in crit, but crash in first lap (where Steve went down) bent his derailleur hanger, so shifting was uneven ... and his move got reeled in because Steve couldn't stand-up and hit it for finishing sprint. (When he stood, the gears went flaky.) Without these technical difficulties, I place Steven on podium. Alas, he picked up first page (of results list) ... worthy of a celebration!
I left the house about 8:00 AM for an epic 93 mile ride up and around Mount Bachelor. Sue and Pierre were a bit behind me, having left Lavabelles at 8:20 AM. The ride was truly epic (for me), wonderful and exciting for about the first 80 miles. Up and over Bachelor, at 6,400', a tough 20 mile climb, increasing inclination each mile, to the final push over the top. Following last Wednesday's cruise in the rain/snow, where I rode with great caution, in today's dry heat, I let go and descended the curvy backside of Bachelor without once applying brakes (although I sat up from time to time, increasing wind resistance, decreasing speed). Beautiful ride, 5,256' climbing and 5,471 calories burned, max speed 42.31 mph. I mitigated my high calorie burn with a stop at Elk Lake Resort where I downed two Hagen-Daz ice creams.
Downside was at about mile 82, having broken my left cleat on final climb, my left heel slid into the rear wheel and took out 4-5 spokes, making bike unusable. I walked a couple miles until a nice crew in a Volkswagen camper (the official vehicle of Bend) picked me up and gave me a lift to Steve's crit ... All things considered, minor disasters, a great day! Garmin road trip map and elevation capture below. 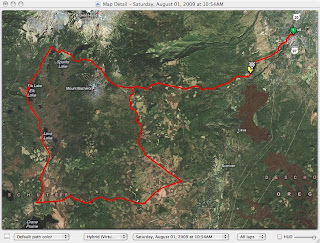 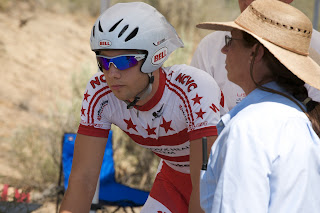 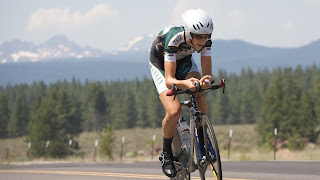 We had exceptional results. First off at 11:04 AM, 16 year old Steven Kendall won 10th place for the TT. He was followed by Steve Black, who finished "first page" (of the results sheet), passing three riders in front of him -- riders launch from the start house at 30 second intervals. Nathan wrapped up, placing 9th in the 17-18 year-old TT, a very, very solid result -- considering TT is not Nathan's specialty.
Sounds like we're heading off to Smith Rock State Park for an evening picnic, mountain bike ride, river float and what not. Another day!
Thursday, July 29, 2009 -- Road Race
Nathan wins 2nd, Steve Black gets 3rd. Massive props to both, to Sue Hefler/Pierre Pelletier of HP Coaching, and NCVC Juniors who developed these two champions. 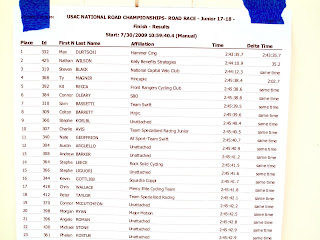 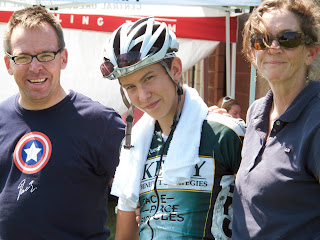 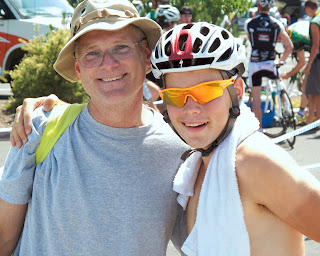 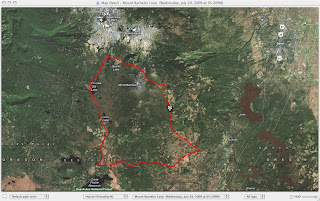 While the U23 racers had a 120 mile road race, we had no events for our crew. I took a nice ride around Mount Bachelor, 53 miles, starting at a snow park on the east shoulder at 5,034' altitude (Garmin capture above). My strategy was to do the hardest hills first. My initial effort took me uphill for seven miles to the ski area base at 6,400'. As I came up the hill, dark clouds began to rumble and rain began -- although sunshine covered much of the area at lesser altitudes. As I swooped down off the mountain at 40+ mph, some of the rain turned to wet snow. Visibility was poor. I gripped my brakes tightly sweeping down S-curves and hoped I wouldn't hit ice. All turned out well as the downhill softened and I cruised. The balance of the ride consisted mostly of light rollers. I had good legs and was able to come in in 3 hours 38 minutes.
When I returned to my car I drove much of the course in order to take pictures. Some nice shots starting here and a couple below. 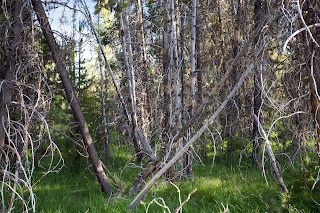 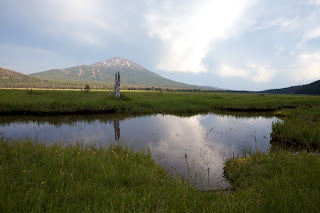 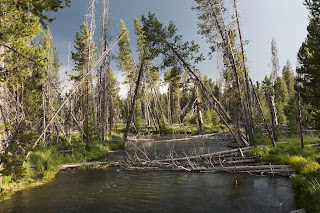 Deschutes River, Forest Service Rd. 40
When I returned to the house about 8 PM, the gang was in fiesta mode, having moved tables and chairs from our three bungalows into the back yard and cooked-up a taco and burrito feast. A good ending. Tomorrow, Nathan and Steve Black have their 70 mile road race for the national championship.
Tuesday, July 28, 2009 -- 15-16 Road Race, 75 Km. (47 mi.)
We transitioned pretty well from the Cascades races, and the troops arrived ... lots more help. The wonderful Kendall family, Tom, Judy, Bradley and Steve; coaches Sue Hefler and Pierre Pelletier; and Steve Black ... father Reed arrives Wednesday night. So I had a lot less to worry about, less running around and getting organized. Our competition today was the 15-16 road race, where Steve K. rolled out into the high desert dry heat and hit his race hard. It was a 75 kilometer circuit with 14 laps over mostly gentle rollers and a few sharp turns. There was a pretty significant crash as the riders raced out of the high school starting area and got tripped-up around an intersection traffic circle. Luckily, Steve wasn't involved. An early break of three took the honors, riding off to a two-minute+ gap. Steve worked to bridge across but was stifled. He finished front of the main pack in 15th. A great effort and result, his second full day in Bend. More to come. Coach Sue's blog notes are here.
Shifting gears to vacation mode, I rode out the Skyliners time trial course and a bit more. Tomorrow, a no-race day for our crew, I hope to complete a 56-mile circuit around Mount Bachelor and grab some more photos in the Sparks Lake area (like this one), in the warm evening light and clear air (about 7:00 PM).
Posted by Jim Wilson at 10:00 PM