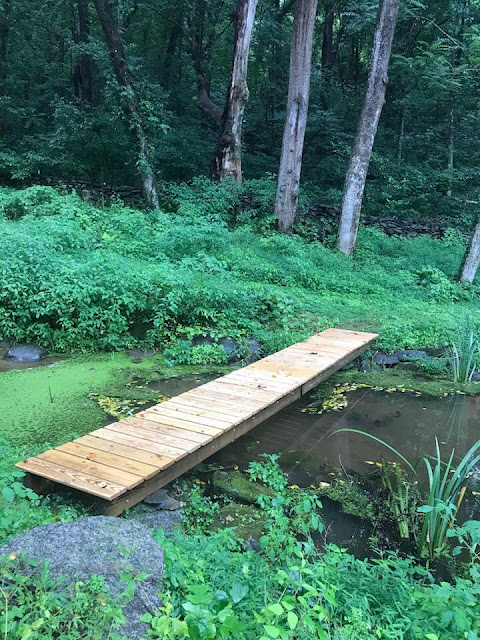 I sketched the design, wrote out a bill of materials. I let the drawing sit, revised it, added detail, thought it through, looked at models. I designed a buttress of rock and rebar, one for either end, and measured the gap. It was 20 feet across the pond inlet, bank to bank.

I debated what type lumber. What type stress will my bridge support? Grandkids jumping up and down? (I dream.) A lawn mower? Snow and ice … Most lumber only goes so long as sixteen feet. How to form a 20-foot-truss? I work alone. How to build, then carry the bridge? I could build it in place, over the water. Maybe. Maybe not. How do I haul lumber to the site? It could be delivered. I asked an expert, a builder friend, Robert, how wide should I make the bridge? “The wider the better,” he said. I chose 32 inches, so I could cut three deck pieces from each eight-foot board, about fifteen long boards in all.

It was a delightful cogitation, which I stretched and chewed for about six months. I decided to bind two ten-foot wood girders with a sixteen-foot piece. I debated types of stock — 4x4, 2x6 or 2x8 inch treated — the types of bolts, binders, screws and fasteners, and the type of glue. I pulled up bridge designs for the Appalachian Trail and challenged my specs. I considered features like a toe rail but said not. I decided on 2x8 inch pine for the truss frame, topped by 5/4x6 inch deck boards. I fastened the truss beams using brown-enameled carriage bolts, washers and nuts, with a finger-thick smear of all-weather glue snaked between bolted boards.

My grandfather H.R. Gibbons was a Stevens-educated engineer, working first at Hyatt Roller Bearing and then General Motors, both jobs under Alfred Sloan. H.R. was a man of precision and standards. His woodshop-and-garage was immaculate and well-equipped — DeWalt radial saw, drill press, band saw, automotive tools, and more. H.R. built the rowboat my sister Kathy and I, my mother Joan and I, pulled out onto the Tred Avon which curled around my grandparent’s house, Boundary Point.

H.R. and my grandmother Dot had two daughters, Lois and Joan. Joan, my mother, took to son-like hobbies with her father. She built furniture, made skilled things with wood, glue and varnish. She was a lab worker at Merck early on and, later, for most of her life, a middle-school math teacher. I loved her. We played baseball catch together on the tarry pavement and on park playgrounds in Washington, DC. We held hands and danced in summer downpours in our galoshes. She served mustard sandwiches and Ovaltine in our small 32nd Place house.

I loved Dad, too, but he was different, a disorganized creative, a writer, a disrupter. He took-on and fixed the world on a large scale — the Pentagon Papers, Vietnam War, and Iraq, an embed with infantry soldiers, and more.

Dad and I built a lot of things together. We made a soap box derby race car from plywood, lath, and fiberglass, with wheels and steering gear from a General Motors kit. We took Mom’s ironing board and used it to draw the pattern of the fuselage bottom on a four-by-eight-foot sheet of three-quarter inch marine plywood. That car, the soap box derby, was the bomb. We had it for many years, racing down neighborhood streets, and pushing it back uphill. I was about nine years old when we drew the fuselage. When I grew too big for the box, Dad and I cut away the car’s rear bulkhead, so I could squeeze my long, lanky teenage frame into the flyer. My neighborhood buds, Russ, Dan, Jamie, Tom and others, would do crazy things in the yellow race car, skidding it across gravel and tumbling into a ditch — and worse.

None of us died, and all injuries seemed to heal in about a day. That was good. We were cool kids. Dad was a cool dad, “Jungle George.” 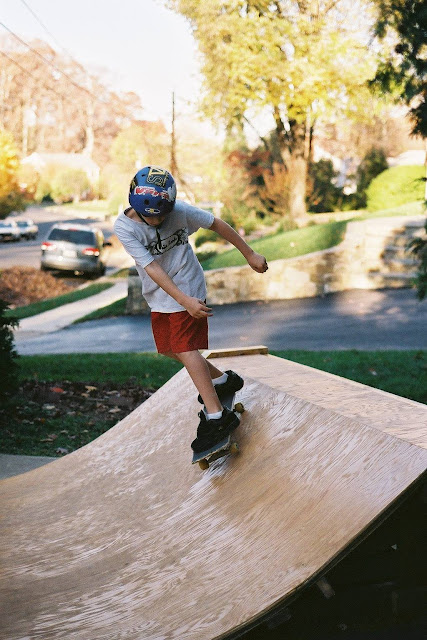 I built things for and with my own boys, Nathan and Avery. Some of it was good, some not so. I remember the delight they expressed when I built a chair framed in two-by-fours, with the seat and back “crafted” from their old skateboard decks. “Dad, so cool!”

Skateboarding was a thing of their youth. We’d hunt out skateboard parks with ramps and “swimming” pools where the boys would loop, whip and hop about. They’d foregather with their friends to perform and perfect tricks. An early project I built was a quarter-pipe ramp, which the kids could roll-up, twist and squirt about — and sometimes crash and fall.

The initial ramp was a simple wedge made of three-quarter inch plywood undergirded by two-by-fours and scrap wood. It rose from our driveway to about 18-inches. It was pretty good. The kids loved it. They’d roll down the street, into our driveway, then cut a curve and twist across the wedge. Like many things I do, the ramp was subjected to progressive refinement. We made it taller and, using stubs, braces and flexible quarter-inch marine plywood, created a gentle curve, and a top lip, so it genuinely resembled a pipe, not some kick ramp. I coated the surfaces with marine varnish. More kids were attracted to our house (a win in most any child’s esteem). Sometimes, we’d come home and see the ramp in full use, skateboarders training and experimenting. They were very good.

I saw my own possibility for fun and elevation. I didn’t do skateboards owing to my poor balance, but I rode bikes. I had bought a used ten speed for $15 at a garage sale; it was my commuter bike. I called attention to my boys, put on my cycling helmet, pedaled hard, and launched off the ramp. I had a vision of Evel Knievel on his motorcycle, soaring over a stack of cars or across a river gorge, landing triumphantly, and throwing his arms up in victory as he rolled smoothly out after landing.

My weight distribution and speed were wrong, so as I came over the ramp my bike nosed-down and dropped away. I continued in the air, at about six feet altitude, and then belly-flopped down to the street pavement.

After about five or ten minutes of inert groaning and injury self-assessment, I lumbered-up, aided by family members, made my way into the house, had the bath, and medicated with pain pills and smears of ointment. I was pretty bruised, kind of like a soap-box derby crash of yore. Otherwise, I was somewhat pleased with myself.

This is how we Wilson boys played.

What a wonderful story. Thank you for sharing these family history memories, and the adventures of your creative building! Loved the ride through the journey of your wordscapes.

I hope you are having a lovely weekend!!

Great posting. Glad you survived your childhood. And adulthood.

Thank you, David. You and yours should visit sometime. It's about 45 minutes west on 66. -- Jim